Conferences are one of the most used methods to gather large groups of people in one place and to convey important messages to many people quickly and effectively. There are many different reasons for holding a conference, ranging from a great opportunity to brainstorm to brief staff on operational changes to a simple boost of morale. If you’re considering holding a conference but not sure whether to make the leap or not, have a look at this article on how they can be useful.
Despite the fact that conferences are the most common large scale event that companies organise they can still often be deathly dull, and consist of nothing but PowerPoint after PowerPoint which bores the guests to tears. To avoid your conference doing the same, here are 3 conference team building events which work particularly well at these types of events. 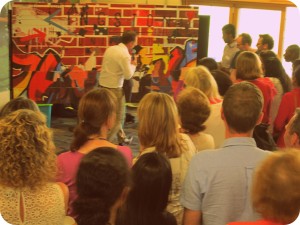 Urban Art is a team building activity in which the entire group is split into smaller teams. These teams are each then given a section of larger piece of urban artwork that they must scale up and recreate as accurately as possible. The reason that this activity works so well as a conference team building activity is its emphasis on what can be created by all working together. It also challenges an entirely different part of the brain than they will have been using for the rest of the conference, and gets them reenergised. The reveal of the end piece is always a dramatic climax to the event, and can be kept by the client as a memory of the event to be displayed proudly at the company headquarters. We recently ran an Urban Art team building activity as part of a large corporate conference, and we couldn’t stop hearing how great they found it! 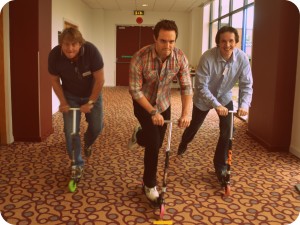 Get In The Zone is another favourite team building activity for conferences because it is frantic, hilarious, and a complete change from the static ‘sitting and listening’ style activities the delegates which will probably take up the majority of the delegates time. In Get in the Zone teams are challenged to take on over 100 different mini activities to score points and ultimately go for victory. It’s a chance to not only get the delegates’ competitive side going, it’s also a fun way to assess different people’s strengths and weaknesses. Have a look for yourself in this video!

The Rollercoaster is one of our newer activities, but works incredibly well for large groups such as can often be found at conferences! Teams each build one section of a huge rollercoaster that ends up automatically setting off a chain reaction of balls running along the rails until the last ball reaches the end of the course. Similarly to Urban Art, the final rollercoaster race is a brilliant spectacle, and really means the delegates feel they’ve achieved something. As well as a technical challenge though, there is also a creative element to the task, so both sides of the brain are put to work! Check out these great video of a rollercoaster we made with 170 people at a conference recently.